Ok, so as I was saying last time we chatted, it was almost time to go home when the fire alarm rang. Normally this isn't a huge deal ... but it was pouring rain and we were packing up to go home- and did I mention that we smelled smoke??

Yes, you heard me,
WE SMELLED SMOKE!!

I grabbed my backpack and walked quickly in line behind Ms. T.  Now if there's one thing you should know about a super spy like me, it's that I always have my spy supplies.  Yep, my backpack not only has my books and school stuff in it, but it also has my binoculars, duct tape, pen, and notebook- because a girl never knows when that kind of stuff will come in handy. 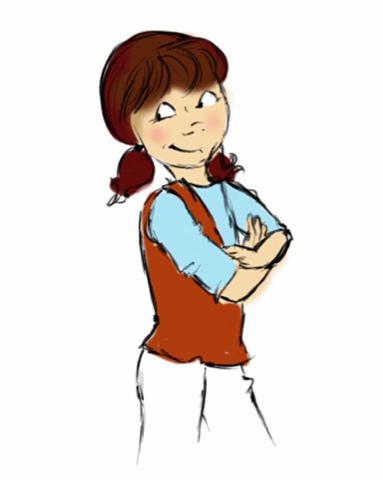 When we got outside, we lined up at the edge of the playground.  Ms. T came over to me and asked if she could use my binoculars.  I couldn't believe it- she has never asked to use them before.  I quickly pulled them out of my bag and she began to search the school grounds.  In the distance, we heard a siren.  As it got closer, we realized it was the honking of a fire engine.

We were all getting wetter by the minute with no umbrellas, but no one was paying any attention to the rain.  We were all in shock as we watched the firemen run into our school.

You know, I must say that firemen have a dangerous job.  Everyone else runs out of a burning building, and they run into it.  I call that a hero.

We couldn't really smell smoke any longer, but the rain was probably taking care of that.  This is about the time that panic started setting in.  All of the parents that pick their kids up every day started running around like crazy to find their kid.  The teachers were checking kids off their roll list and the place was clearing out in a hurry.

There were only six kids left in my class by the time the firemen came back out of the school.  The chief held a megaphone up to his mouth and told us that everything was fine.
There was a small box in his hand with something inside. I stood on my tiptoes to try and see what he had, but no luck.

"There is no need for panic," the fireman said, "everything is under control. We found the source of the alarm."  He pulled a bag from the box. It was partially black and had a big hole in the top.

"It looks like someone forgot about the bag of popcorn they placed in the microwave. Let this be a lesson to all of you. This could have caused a fire. The outcome could have been totally different."

We all looked around at each other. No one looked guilty, but then no one would probably ever admit to that mistake.

Wow- all of this over a bag of popcorn? I couldn't believe it. We slowly went back inside and gathered our things and went back out to the buses. I wonder who did it... I sat on the bus and got my binoculars out and scanned the people still standing around in bunches. As we pulled out, I noticed Mrs. Trummel, the brand new secretary,  with her head in her hands and her shoulders shaking...

Hmmm, looks like she's the guilty one. Poor thing- it was her first day on the job.   Oh well, I guess we all learned to keep an eye on the microwave.

Oh well- until next week---
Stay curious and keep Jesus as your bestest friend.

Posted by Angie Wilson at 1:24 PM No comments:

Guess what?  I've been invited to visit this blog every week to talk about mysteries.  How cool is that?  I never dreamed that anyone would ask me- Miss Graceanne Faith- to be a guest blogger.
Actually, I didn't even know that guest bloggers existed until two days ago.


But anyway, here I am to tell you all about the exciting world of a super spy.


Posted by Angie Wilson at 7:28 AM No comments:

We are so pleased that the second book in the Gracie's Mysteries series  topped the Hot New Releases chart for 4 weeks.  It was #1... 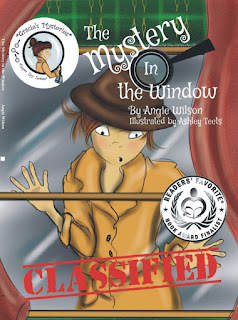